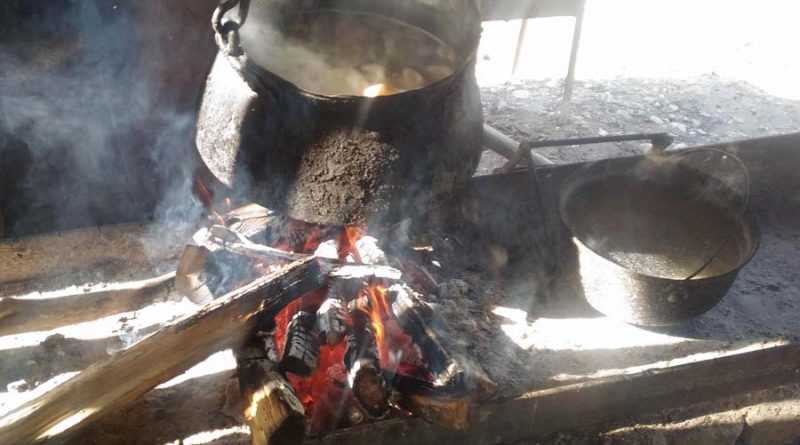 Dairy products, meat and beer are characteristic features of Pshav-Khevsureti cuisine. Round-shaped bread is generally baked from barley in stone ovens. It is also a tradition to shape loaves bread by means of a wooden implement. Kada bread is baked both kveliani (with cheese) and khavitsiani guliani (with cottage cheese). Khinkali are made with meat, cottage cheese and potato fillings.
Milk is used to produce melted butter, cheese, dambali khacho, which is a special soaked cottage cheese. Dambali khacho is a Pshav dish that was recognized as part of Georgia’s intangible heritage in 2014. Beef and mutton are in a variety of local meat dishes.
Melted butter is used to prepare a traditional dish called khavitsi (cottage cheese boiled in butter). The most popular dishes to treat guests are kninkali (dumplings generally with the filling of mutton but also of cottage cheese and potatoes spiced with onion and pepper) and ketseula (khachapuri cooked in melted butter).

KHAVITSI – 4 kg melted butter 50 g milk (or water) 1 tablespoon salt 1.5 kg brown flour Khavitsi is cooked in a copper pan. Melt a tablespoon of salt in 50 g of milk, add 4 kg of melted butter and stir the mixture until it is fully combined. After it boils, add 1.5 kg of brown flour, put it on a low heat and stir occasionally with a flat wooden spoon for about 2 hours. At first a thick mixture is produced which should be stirred until it starts thinning – the flour mixture will sink to the bottom and the butter will come to the surface. When the mass changes its color, the khavitsi is ready. Fruit and vegetables grow well in Piraketa Khevsureti and Pshavi. To prepare pkhali (a vegetable pate made of spinach and other herbs), the following herbs can be used: amaranth, pigweed, fern, nettle and watercress. Local fruits and berries include pears, apples, strawberries, raspberries, currants, gooseberries, bilberries, etc. For holiday feasts, locals make vodka and beer. Vodka is distilled from barley, hop and barley-hop mix. Sometimes it is made from common elder and elder. Beer has a special place in Pshav-Khevsur culture.