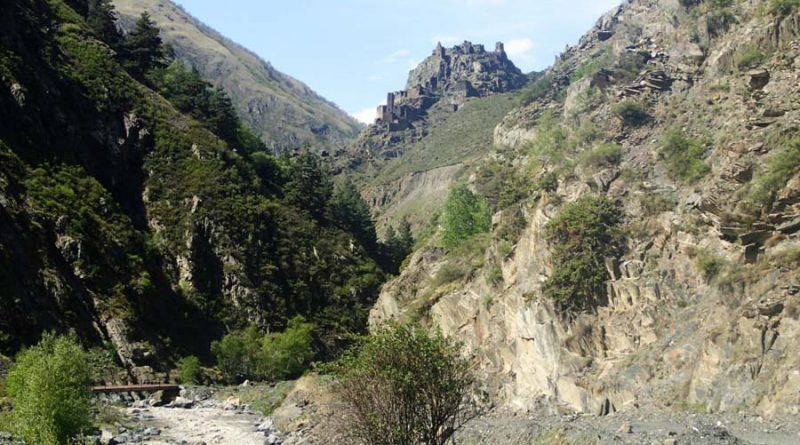 The ethno-cultural heritage of Pshav-Khevsureti is unique. Fortress-villages in the region (Lebasikari, Shatili, Mutso, etc.) are impressive due to their historical cross-icons and excellent mythological specimens. The local way of life and customs are also interesting. The region is famous for its folk poetry and traditions. It gave birth to the creation of the Lay of the of the Huntsman and the Tiger. The settlement of Mindia of Khogai (the hero of Khevsur folklore) is also in Pshav-Khevsureti. The Khevsur way of life was a source of inspiration for the wellknown and beloved Georgian writer and poet Vazha-Pshavela.
There are over 200 items of material and cultural heritage, including fortress towers, churches, and sanctuaries. As a matter of fact, the cross-sanctuaries and churches date back to the prehistoric age, although most of them have been destroyed and are only partially preserved. These ancient ruins give one an idea of the history and the material and spiritual culture of the region.
Of interest are the natural phenomena (rocks, trees, springs, etc.), which are used as shrines and are regarded as sacred places. These shrines have made it possible to preserve forests and unique ecosystems within a rather vast territory of highlands. Locals banned hunting in sacred groves, felling trees and even mowing grass was banned. The understanding and appreciation for nature has been passed on from generation to generation of the Khevsur people and is still a part of their identity to this day.
Objects of material culture were generally of military and defensive importance. Such buildings were erected along the northern border. Notable are the architectural masterpieces of the late Middle Ages: Guro Fortress; Lebaiskari Fortress; the Kistani fortifications; Kachu Fortress; the Shatili, Mutso and Ardoti stone fortifications; and the Khakhabo fortresses.
Anatori and Mutso vaults are particularly interesting due to their location, architectural content and function. These buildings also date back to the Middle Ages.
Visitors can see many of these cultural and historical monuments along several travel routes.