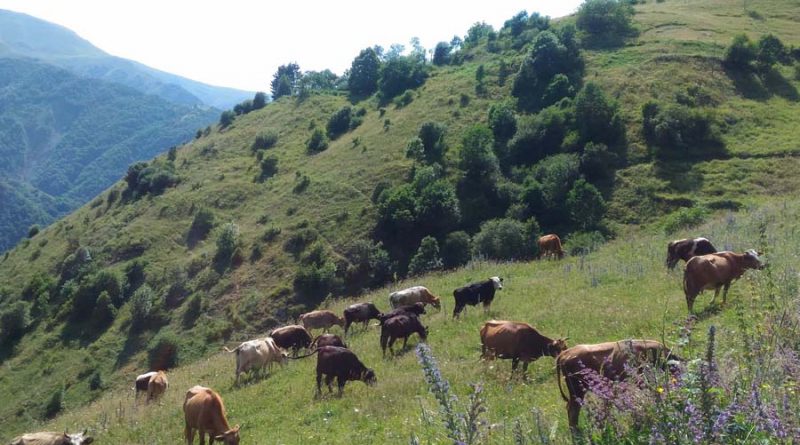 For ages the Pshav-Khevsureti population has bred cattle due to the vast the grasslands and pastures at their disposal. The main products are meat, cheese, refined butter, and other dairy and meat products. Residents breed numerous types of cows.

Of particular interest is the Khevsurian cow – small in body, hardy and easily fed in winter, it is noted for the high fat content of its milk and is well adapted to the difficult mountain conditions and climate.

Unlike cuttle relatively fewer sheep were raised in the region. The remote distance of winter pastures and dangerous transportation routes made sheep a less popular animal to raise. In general, the typical Khevsurian
deck-roof house was designed so as to ensure comfortable housing for both humans and cattle. The ground floor (tvali) housed the family and cattle. The upper floor, the so-called “cherkho”, was the men’s residence. The third floor, a threshing floor, was used to thresh and store grain. Cowsheds and cattle pens can still be found on summer pastures.

Beekeeping is also prevalent in the region. In lower mountain villages (Piraketa Khevsurerti and Pshavi), the population was usually grew vegetables and fished (trout in particular); however, such farming could hardly provide for a whole family.
Cottage industry, which includes wool processing (knitting socks, making coverlets, etc.); smithery; and silver working among other activities, were developed practices in Pshav-Khevsureti. Today, some families still engage in such activities (fancy-work, knitting, stone dressing and woodworking); the hand-made goods of local craftsmen are noted for their excellence and originality.
In general, the region lacks sufficient natural resources of commercial importance. The region also has poor croplands. The region’s mountain setting excludes the possibility of growing enough wheat, barley and rye to satisfy the daily needs of locals. Therefore, economic contact with the lowland is of vital importance for the villages of Khevsureti. Bartering practices are still very common. Residents exchange their locally made dairy products in exchange for grains, salt, wine and other products