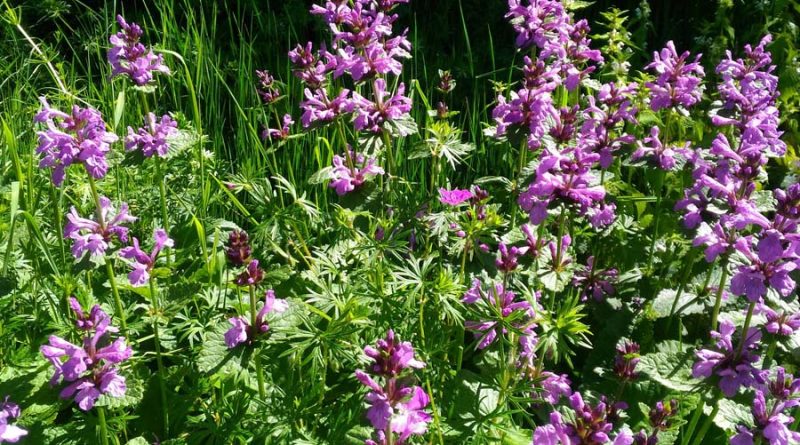 The region’s biodiversity is influenced by its location at the junction of the Central and Eastern Caucasus. The flora of Pshav-Khevsureti includes several rare varieties. Over 20 varieties of flora are included in the Red List of Georgia, which is an endangered species list. There are also some endemic flora varieties that can only be found in the Caucasus.

The level of endemism (the proportional number of endemic species) is particularly high among plant species. Pshav-Khevsureti flora comprise 212 Caucasian endemic species, which means that 8 out of 17 genera spread throughout the Caucasus are found here; accordingly, 34.4 % of the plant species found in Pshav-Khevsureti are Caucasian endemics.
In the middle belt of the region’s mountains (the Aragvi River basin gorge), beech
and oak-hornbeam forests prevail; in the sub-Alpine forest zone, there are Alpine shrubs and subalpine high grasses. The Alpine zone is composed of alpine meadows. Petrophylic flora can be found in the subnival zone. All four zones are present in the Asa and Arghuni gorges (Pirikita Khevsureti). The Pshav-Khevsureti forests are characterized by their alder forests (Alnus barbata, A. incana) and willow species (Salix excelsa, S.alba). In separate areas, the black poplar (Populus nigra) and the sessile oak (Quercus petraea subsp.iberica) can be found. The optimal altitude of the range is 1000 m a.s.l. In the oak-forest formation, oak-hornbeam, oak-azalea, oak-nut wood and oak-cornel forests, which also have oak-spear grass and oak-fescue, are present. Higher up, at 1500-1800 m a.s.l, the forests give way to the high-mountain oak (Quercus macranthera). The forests in Pshav-Khevsureti are rather thin and sparse, and are home to the yellow azalea (Rhododendron leteum) and wild fruits—Caucasian pear, hawthorn and medlar. On the northern slope, the oriental beech (Fagus orientalis) is interspersed with the common hornbeam (Carpinus betulus, C. caucasicus), the field maple (Acer campestre, A. laetum), the European ash (Fraxinus excelsior), the elm (Ulmus tremula), and the aspen (Populus tremula). Higher still, the silver birch (Betula pendula) and thehigh-mountain oak (Quercus macrathera) grow. The common hazel (Corylus avellana), the guelder-rose (Viburnum opulus), dog-rose (Rosa canina), and other shrubs also grow in the area.

Mid-altitude mountain forests (1,5001,700 m) are composed of beech and oak-forests, which slowly give way to subalpine forests. The locality is characterized by birch wood (Betula litwinowii). The North Caucasus endemic species, the Caucasian birch (Betula raddeana), prevails in Pirikita Khevsureti and is commonly mixed with the rowan (Sorbus aucuparia, S. caucasigena), goat willow (Salix caprea), and others. In Pirikita Khevsureti, of particular importance is the share of Caucasian pine (Pinus sosnowskyi). The birch wood zone in some places goes up to 2500 m a.s.l. Rhododendron, yellow azalea, willow, and other tree varieties grow alongside the birch trees.
Over 200 varieties of rare grasses are found in the subalpine grasslands that have no analogs elsewhere in Georgia. In the subalpine zones, the snow rose/ alpine tea (Rhododendron caucasicum) and the bilberry (Vaccinium myrtilus, vitis idaea) species predominate. It is noteworthy that the rhododendron always grows a the northern slope and never on the southern one. In the subalpine zone, the rock currant and Alpine currant (Ribes biebersteini, R. alpinum), the wayfarer or wayfaring tree (Viburnum lantana), the Caucasian honeysuckle (Lonicera caucasica), the gooseberry (Grossularia reclinata) predominate. The rhododendron is particularly common in the Arghuni and Asa subalpine and Alpine zones.
The cow-parsnip (Heracleum sosnowksyi) is a commonly found plant in the region. It is a rather dangerous plant—when put in contact with bare skin, it can cause rashes, scarring, and horrible blisters. Watch out!
Alpine meadows (‘Alpine spots’) can be found in Pirikita Khevsureti at elevations ranging from 2900–3300 m a.s.l. The Alpine spots have several varieties of plants (Taraxacum confusum, Carum caucasicum, Poa alpine, Carex micropodioides, Briza marcowiczi, Luzula sudetica, Platago saxatilis, and Minuartia oreina). There are Alpine meadows on Mt. Arkhoti, the Guro-Giorgitsminda gorges, Khone and Atsunta.

Relict and endemic species – the oldest, indigenous and unique plant species grow throughout Pshav-Khevsureti, including: the yew grove, the snow rose/Alpine tea (Rhododendron caucasicum), the Litvinov’s and Radde’s birches (Betuna litwinowi, B.raddeana) and blue couch grass/ astragalus (Astracanta denudata, Astragalus denudatus). The Armenian rowan (Sorbus hajestana), which until recently was considered to be endemic to Armenia, can be found in the outskirts of Shatili and Tsukio. Half of Pshav-Khevsureti’s flora consists of plants unique to Georgia and the Caucasus.

The practice of medicine in Pshav-Khevsureti has a long history. Because of its remoteness from the lowland, highlanders had to seek out local therapeutic agents. As such, locals used several plants that grew in the area for medicinal purposes. Plants with medicinal properties prevail in the Andaki River Valley. Plants rich in different vitamins include the common hop (Humulus lupulus) and the common sea-buckthorn (Hippophae rhamnoides). In the subalpine and Alpine zone, Alpine tea, dog-roses, raspberries, crowberries and bilberries are widely found. The common ragwort (Senecio platypyllus), from which a cordial is prepared, grows on Roshka rocks. In Pirikita Khevsureti, giant hogweed/angelica (Angelica tatianae) grows, which is a plant used to treat gastrointestinal disorders.