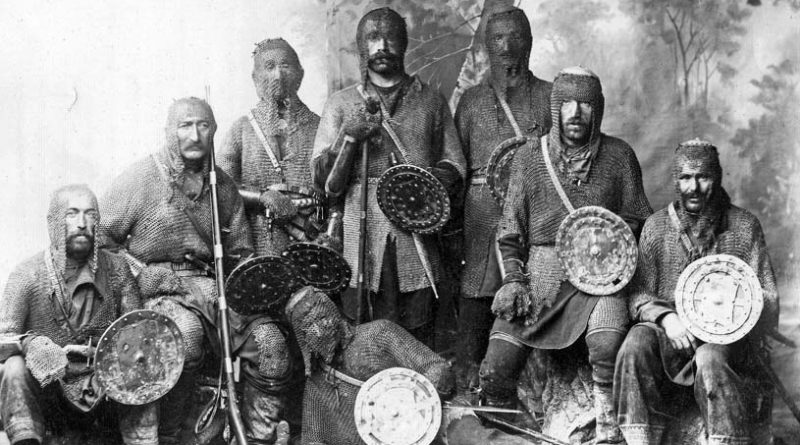 According to archeological records, present Pshav-Khevsureti was previously inhabited by man as early as the prehistoric age.
Khevsureti and Pshavi are mentioned in Georgian historical sources together as “Phkhovi”, and the Khevsurs and Pshav proper as “Phkhovelebi” (Pkhovis). Today, this name is preserved in the village “Shuapkho” (Pshavi).
The Pkhovi people are first mentioned in The Conversion of Kartli, a narrative work chonicling the Kingdom of Iberia’s conversion to Christianity in 326 AD. According to chronicles, Pkhovi was settled in the 4th century; the pagan Pkhovis refused to adopt Christianity and part of them migrated to Tusheti and areas beyond the Greater Caucasus. The entire territory of Pshavi was part of Kvetari saeristavo (principality), then of Ertso-Tianeti samouravo (province). In general, Georgian highlander communities enjoyed a degree of autonomy (there was no serfdom); they submitted themselves only to the monarch. The highlander communities were administered by Ksani and Aragvi eristavis (governors). They (the highlanders) defended the northern border of the kingdom and detached forces because they were regarded as exceptional warriors. Local communities were ruled by khevisberis (elders). According to community traditions and when their freedom was endangered by the royal government, they were ready for apostasy and rebellion.
The highland region of Aragvi Gorge was ruled by khevisberis. The patriarchal traditions and customs were practiced in the 20th century. Khevsurs used to gather people for military meetings; their duties were to maintain local traditions, follow tribal laws and administer justice, and assemble troops in case of emergency. They submitted to the monarch, although without disruption of the tribal unity.
In the last years of Queen Tamar’s rule during the 12th century, the Pkhovis rebelled against the royal government, but after a three-year struggle, they resolved their issues and swore allegiance to the crown. In the 15th century when a united Georgia began to break apart into smaller kingdoms and provinces, Pshav-Khevsureti and Tusheti gave up the Kingdom of Kakheti, but in the 16th century again became the kingdom’s ally.
Pshav-Khevsurs played an active role in fighting against the northern Caucasians in the 19th century. The residents of Shatili took up arms against the Shamil; they fortified fortresses, defended against the troops of the Leks (Ingush) and were often victorious.
From a strategic and military standpoint, the region was a stronghold that safeguarded the country from the north and east, and defended the lowland from attacks of foraying troops.
Starting in the 1950s, people began migrating from the highlands to the lowlands. In order to develop land and employ the highland population, a “planned resettlement” was implemented by the Soviet government, which, unfortunately, resulted in the deterioration, desertion, and disappearance of settlements, villages, traditions and local economic customs. The region is still recovering from the “planned resettlement”. Pshav-Khevsureti has yet to fully repopulate itself.
Today, the Pshav-Khevsureti Administration operates within the Dusheti region.