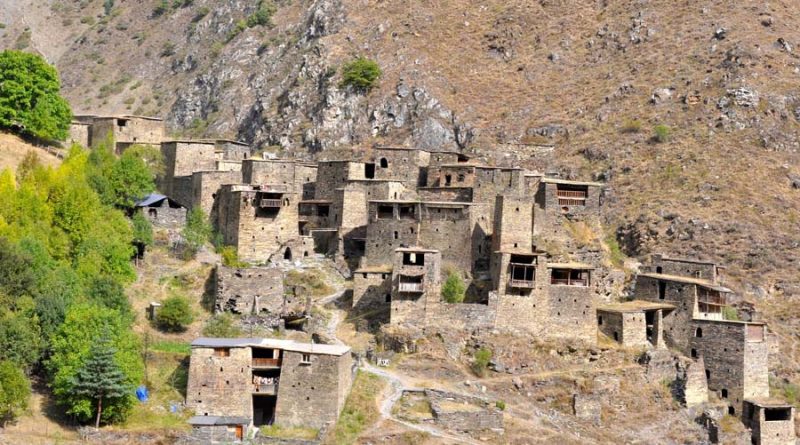 Currently, houses in Pshavi are not of one architecturalstyle. Urban-style houses are most common, especially within the Magharoskari community sakrebulo. A traditional Pshav house is two-story dry stone structure. The first floor was a cowshed/stable, while the second was a darbazi – a “hall like” wide room. It has an opening for smoke – sakomi in the ceiling, which sometimes is simply rectangular, however in some cases it has an angled wooden beam dome called amoktseuli that is supported by a central wooden column called a dedabodzi. The dedabodzi is often adorned with wood-carved ornaments and astral symbols that is an ancient type of eastern Georgian dwelling. Earlier, some houses also had a shed to store hay and grain. In some houses, a maternity hut would be placed in the corner of the cowshed.
More modern houses are built from stone. Cowsheds and haylofts are usually separate structures.

KHEVSUR HOUSE
Built on mountain heights in clustered Khevsur villages, a Khevsur home would host several families/households. In terms of their design and structure, Khevsur fortresses differ in Pirikita Khevsureti (Shatil-Arkhoti) and Piraketa Khevsureti (Aragvi gorge). The towers of Pirikita Khevsureti have a stepwise-cylindrical roof and have a Tush tower style, while those of Piraketa Khevsureti have a Mtiuluri style.
Special compact houses for humans and cattle were built in three-story stone-built terraced structures. The ground floor’s roofing would serve as a yard for the upper floor, while the third floor would house a threshing floor and utility rooms. The ground floor, where the fireplace (kera) would usually be located, is called a shinasi, while the upper floor, where men used to sleep and hay and products in woven baskets were stored, is known as a cherkho.