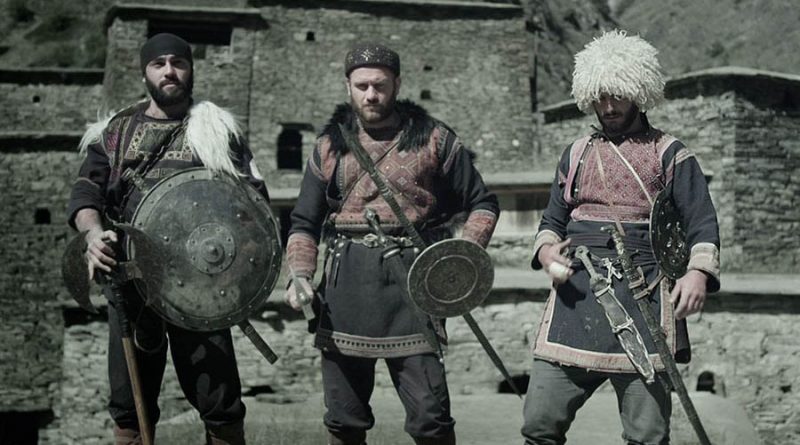 “Fortunately, there had been a person in Georgia, who in the middle of the XX century did wide and profound study of Georgian martial art and methods of raising up a warrior. This person was a Doctor of Pedagogical Science, Associate Member of International Committee for Sports, History and Physical Education, Professor Vasil Elashvili. He was excellent fencer, weapon expert and ethnographer. I am happy that for several years I was one his numerous students.”
Master of Martial Arts Yuri Keinashvili

Khevsurs believed that man should be “perfect in everything” – healthy, strong and active. He should endure cold and heat, all kinds of difficulties of work and war; his complexion and flesh and eyes should demonstrate his valour.
Khevsurs lived near border, so they understood very well that compared to inhabitants of valley they must be better trained physically and prepared for life of warrior. They always behaved with abstinence, arrogance and even haughtiness, often causing envy and jester of neighbours.
It was necessary for Khevsurs to know old customs and legends of model bravery, describing glorious and worthy examples of ancient heroes. Old stories and myths took important place in life of Khevsurs.
Physical and military education of a Khevsur boy started at the age of 5-6 years, when he was already able to act consciously and to understand why he has to perform this or that exercise, or to participate in a game or entertainment. Later, after the approximate age of 7, the boy was preparing for future activities. At this time he already could run fast on small distances, ski well on very special ancient Georgian short mountain skis, slide bravely down the mountains by sledge, was good at climbing and various kinds of jumping. At this age he also demonstrated interest and liking towards weapons, in particular common bow and crossbow. Boys of 10-12 years started shooting firearms.
Physical development and military education of Khevsurs was completed through walking in the mountains, running, rock climbing or climbing 8-10 meter beam knocked in the ground. They learned to ride saddled and unsaddled horses. Special kind of training was so called “Tskhen-mkhedriani” (in other words, racing).
Learning riding involved a lot of complicated skils: mounting and dismounting the horse, bending aside etc. For example, it was a shame and a matter of mocking if a rider put his stomach on the back of the horse while mounting.
Physical training was also reinforced by various kinds of jumping, throwing small stones, pushing around heavy ones, shooting common bow, crossbow, muzzle-loader, flintlock gun and rifle. Folk performances and dances were also very important: round dance, dance with daggers, dance on tip-toe and combination of all these.
As to duels of Khevsurs – fencing, hand-to-hand fighting, Khevsur art of horse-racing etc., being one of the most unique martial arts in the world, they require separate discussion. What does Khevsur fencing include?
Fencing was friendly, light duel between Khevsurs of the same village or the same clan. Such a duel was an exercise and competition for the participants while being entertaining and educational for outsiders. Such single combats were held during male gatherings, “Phekhoni”, or during other peaceful meetings, for example, religious festivals. Fencing was a form of learning how to use sword and shield.
“Shugli” (feuding) was usually held between men of different clans. It was a result of a quarrel, disagreement, clashing and ended up in wounds. It was a combat in which parties were trying to wash down an offence with a drop of blood.
What weapons were used for “Chroba” (wounding)? – Khevsurian sword, rapier, dagger (“white weapons”, or the weapons to wear in sheath); “Satiteni” – battle thimbles (steel rings of various kinds – beating weapon) and so on.
How do Khevsurs hold shield and sword?
Khevsur fencing is characterized by holding both hands together all the time, paired, with sword in the right and shield in the left hand, while both hands move. There is no similar manner of holding weapons anywhere in the world and we can boldly call it Khevsurian reciprocal (paired) holding.
Khevsurs reach such skill in using sword that they can aim to make well targeted strikes with estimated force, only to wound lightly, to cut, to shed only a drop of blood.
What is the system of hand-to-hand combat?
Hand-to-hand combat is a subsystem of martial art, during which the adversaries come so close to each other that it becomes impossible to use “white weapon” (sword, rapier etc.). Then the rules of hand-to-hand combat come into the action.
Hand-to-hand combat is one of the complicated, responsible and key kinds of the duel. It is important not to let the adversary (or adversaries) to get too close grip and to put him out of action before this – wound him enough to put stop to an aggressive attack. For this purpose hidden side-arms are used, among them “satiteni”.
Professor V. Elashvili studied Khevsurian hand-to-hand combat with “satiteni” in 1960. “Satiteni” is a light steel weapon with pointed or smooth surface, consisting of several (usually three) blades, which is put on a thumb.

The material is provided from the book by Yuri Keinashvili “Georgian Martial Arts, Traditions and History”.