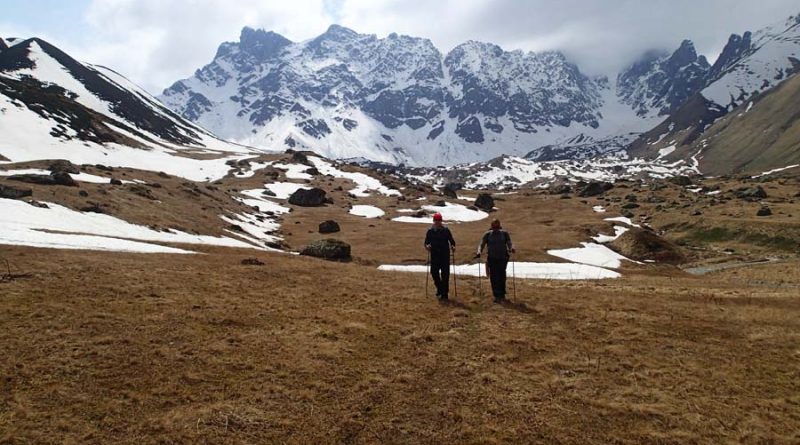 Pshav-Khevsureti is characterized by its complex topography. A large part of the region’s territory is occupied by mountain and grassland landscapes, with the rest being made up of mountain forest and glacial-nival type landscapes. Paleozoic plates and sandstones constitute many of the region’s high and inaccessible ranges. Pirikita Khevsureti has a higher location and is surrounded by glacial ranges. The Liassic layers of slates and sands are also present in Khevsureti. This black slate of the Paleozoic Age is broken and cracked; it crumbles easily and has been used as
a building material in Khevsureti since ancient times. The so-called “wandering blocks” from Chaukhi and Roshka (19502000 m a.s.l.) are of glacial origin. They drifted away from the glaciers found in the Chaukhi Massif (3700-3800 m a.s.l.). The traces of old glaciers can also be seen in an area adjoining Mount Borbalo. Small amounts of marble (Karatis Tsveri), copper, antimony, rock crystal (quartz), etc. can be found within Pshav-Khevsureti.
The disconnected relief of river valleys (Arghuni, Asa, Khevsuretis and Pshavis Aragvi and their tributaries) and the valley-connecting ridges (2500-3000 m a.s.l) contribute to the landscape’s uniqueness. Of importance among the river valleys is the main watershed (located in the Khevsureti Range), which is a part of theGreater Caucasus watershed and includes a bow-shaped section between Chaukhi Massif and the peak of Mount Patara Borbalo. It divides Khevsureti into two parts, with its crown belt being stretched northward. Here, in addition to Chaukhi Massif and the Patara Borbalo peak, the Alps rise above 2800-3000 m a.s.l. Other important ranges include: Gudamakari, Chimghis Klde, Kavkasioni, Mutso, Chanchakhi, Khidotani, Archilos Klde and Atsunta.
The slopes of Khevsureti’s ridges are noted for their steepness, which is most pronounced at lower heights. These steep slopes that gradually transition into comparatively even mountain crests and velvety Alpine meadows — a distinguishing feature of the peculiarity and diversity of the region’s tourist routes. The Chaukhi rock massif is a particularly interesting and impressive site to behold.

Soil in Pshav-Khevsureti varies according to altitude. Forest, peat and mountain-meadow (which can be found between 2,000-3,500 m a.s.l) primitive soils are found here. They are mostly composed of clay slates and sandstones.