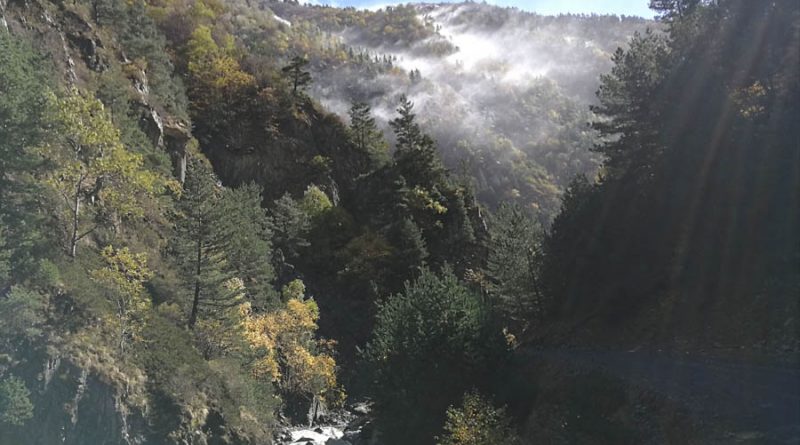 Easily-driven motor road (dirt) Distance: 25 km Length: 7 hrs (on foot) Max. height: 1,630 m Min. height: 1,330 m
6 km from Barisakho, in the village of Ortskali, a dirt road turns to the right and runs along the right bank of the Aragvi River. 4-wheel drive SUVs can make it up to Ukanapshavi. Footpaths on the route run all the way up to the Great Caucasus, passing the villages of Shaupkho, Muko (1.1) and Ukanapshavi (1.2).
Trails leading to the Greater Caucasus Range from Pshavi

1.1 MUKO–MATURA–BOROLA RANGE ENVIRONS
Distance: 14 km. Above average difficulty Length: 6 hrs (on foot) Max. height: 2,900 m Min. height: 1,330 m
The trail starts in the nearby surroundings of the village of Muko and goes to the Maturkhevi River gorge. It is possible to cross the river by means of small wood rafts/logs. These logs are frequently brought in during the spring flood and their location changes from year to year. 5km along the way, the road goes to the small village of Matura, and there from runs along the eastern river bank up to the range and the local shrine (1700 m a.s.l). It then goes round the mountain massif and runs up to a height of 2,200 m. Therefrom the route stops climbing and runs eastward along the range, parallel to the Borilo river gorge. After several kilometers, it reaches the bottom of the Greater Caucasus Range, crosses the river and goes up along a steep 700-m rise towards the range. After passing this distance, at a height of 2,900 m a.s.l, the route joins the third (Datvisjvari-Borola) footpath.

1.2 UKANAPSHAVI–SORBISGORI RANGE
Distance: 7 km. Average difficulty Length: 4 hrs (on foot) Max. height: 3,000 m Min. height: 1,620 m
From the village of Eliagza in Ukana Pshavi, the trail goes northward to Mt. Saorbisgora. After 7 kilometers, it joins the third (Datvisjvari-Borola) footpath, wherefrom it is possible to go over both Andaki Pass (13 km eastward) and Datvisjvari Pass (7 km westward). From Andaki Pass westward, the route descends to the villages of Andaki, Mutso and Shatili. Going eastward, it runs to Mt. Borola. The route can be traversed by foot, horseback and partially by car (from Barisakho to Roshka and from Juta to Stepantsminda).
Distance: 14 km (Roshka-Chaukhi), total distance — 50 km (Barisakho-Stepantsminda) Above average difficulty Length: 6-7 hrs (on foot) Max. height: 3,338 m Min. height: 2,000 m
9 km from Barisakho, there is a left turn on the Barisakho-v.Gudani road. From there, a dirt road runs along the right bank of the Aragvi River to the village of Roshka. The local landscape is defined by deciduous trees from the middle mountain belt. Visitors can see a forest of protected species of alpine oak (Quercus macranthera) and elm (Ulmus glabra). From Roshka (2,000 m a.s.l), the route goes to the Mt. Chaukhi Massif (3,852 m a.s.l) and the Abudelauri lakes (2, 600 m a.s.l). The distance from the village of. Roshka to Abudelauri (the southern slope of Mt. Chaukhi) is 4 km. The site is noted for its intrusive formation of the Jurassic Age, the so-called “swinging blocks”, which have been granted the status of a national monument and are included in the Red Book; vaucluses (karst water springs) and alpine “green lakes” can also be observed here.
The most scenic view, encompassing the southern part of Chaukhi Massif, the Kazbegi peak and the main North Caucasus Range, opens from Mt. Chaukhi (3,338 m a.s.l). One can also observe the Sadzele and Arkhoti passes and Arkhoti, Kalotani and Tanie ranges up to Datvisjvari Pass. The route goes over to the main Greater Caucasus Range. The village of Juta (1,509 m a.s.l.) is 7 km the first settlement. From Juta, a motor road runs along the Sno gorge to the regional center, Stepantsminda.

2.1 ROSHKA–SADZELE PASS–JUTA– STEPANTSMINDA
Traversing this route can be accomplished via a footpath, which starts on the Barisakho-Dudani road. After traversing about 8 km and crossing a bridge, there is a 7 km route that ends in Roshka. The route can covered by foot or horseback.
Distance: 7 km. Average difficulty Length: 607 hrs (on foot) Max. height: 3,056 m Min. height: 2,000 m
The route from Barisakho to Roshka follows a motor road. Northwest along Roshka Gorge, the trail goes to Tapoba, which is at the foot of Sadzele Pass (3,056 m a.s.l.). About 2,500 m along the path, the pass begins a steep incline. The trail 4.2 joins the site. Passing this section of the Roshka-Juta route is easier than that of Chaukhi (Trail 2). 3 DATVISJAVARI PASS– CHANCHAKHI–BOROLA– ANADAKI PASS
Distance: 19 km. Above average difficulty Length: 8-9 hrs (on foot) Max. height: 3,024 m Min. height: 2,000 m The trail commences from Datvisjvari Pass (2,767 m), continues eastward on the main road, then descends to the Chanchakistskali River (2,500 m). The trail turns and leads to Khakhabo (7.1 – Datvisjavari-Tsubrovana/Chanchakhi Pass), wherefrom it goes along the Chanchakistskali up to the village of Khakhabo and then over to Ardoti Gorge. The third trail proper turns eastward and leads up the main Greater Caucasus Range. Upon reaching a height of 3,000 m, it goes eastward to the peak of Mt. Chanchakhi (3,024 m), the Borola peak (2,954 m) and crosses with the trails leading to Pshavi (1.1 and 1.2). The third route reaches Andaki Pass (2,887 m), runs eastward for 13 km along the range, wherefrom it descends to both Mutso and Shatili, and goes over to Tusheti, passing the surroundings of Mt. Borbalo. 4 KISTANI–KALOTANA PASS (2 978m) –KALOTANA AND ASA GORGES– AMGHA–AKHIELI–ARKHOTI–JUTA The route can be traversed by foot and horseback. Distance: 38 km. Difficult Length: 2-3 days Max. height: 3,287 m Min. height: 1,700 m
From Kistani, the road leads southeast. Upon reaching a height of 3,000 m a.s.l. and passing the main Greater Caucasus Range, it descends eastward. At the Aknekhistskali River, the road turns westward towards Anatorisgheli Pass (2,768 m). The trail, while not reaching Kalotana Pass, is divided—one main trail goes northward to Kalotana Pass along the Caucasus ranges at a height of 3, 000 m, while the other trail (4.1) passes Atabe and descends southward to Gudani (11.5 km).
The path of the main Trail 4 descends from Kalotana Pass northward towards the upper reaches of the Kalotana River and follows the gorge up to the site of an ancient Kalotana settlement (1,700 m). Thereafter the path continues along the gorge and descends to the confluence of the Asa River. From here, the route joins Trail 5, which continues eastward to Shatili or northward over to Arkhoti Gorge.
The northward trail: 4 km from the Asa and Kalotana confluence, in parallel with the Asa River, south-westward, in the village of Akhieli, several mountain streams join to form the Asa River. From the village, a 7-km section of the trail runs along the gorge, turns southward and joins the trail leading to Arkhoti through the Roshka Gorge (Trail 4.2 – 9.5 km). After about 5 km, the trail follows the mountain stream and turns westward towards Arkhoti Pass.
At Arkhoti Pass (3,287 m) the route goes down towards the gorge, reaching a the height of 2,700 m, and further down follows the little Veshatskali River at a height of 2,700 m to join the main trail that transfers to Roshka (Trail 2.2 – Roshka-Sadzele). There is a police station 4 km outside of Juta on the way. A dirt motor road runs from Juta to Sno Gorge.

This path connects Trail 4 with the Trail 2 (which is the path going over to Roshka). 5 SHATILI–GIORGITSMINDA– KALOTANA PASS (2,978 m)– KALOTANA AND ASA GORGES
The route can be traversed by foot, horseback, and partially by car (Shatili-Giorgitsminda)
Distance: 29 km. Above average difficulty Length: 2 days, 10 hrs (on foot) Max. height: 3,486 m Min. height: 1,800 m
After passing the Shatili — Giorgitsminda motor road, the trail runs along the Giorgitsminda river gorge up to Isartghele Pass (3 486 m). The route continues northwestward to the village of Tanie, wherefrom the road forks northward and southward. Both paths pass through the gorge. The southward route (5.1) goes along Tanie Gorge to Tanie Lake (2,232 m) and continues further southward, where, at a height of 3,000 m a.s.l., joins Trail 4 and, passing the village of Atabe, heads in the direction of Gudani.
Trail 5 proper continues from the Tanie Gorge northwestward up to the Asa River tributary; thereafter it joins Trail 4 (the Asa and Kalatana confluence), which goes from the Asa River up to the village of Akheli and then over to the gorge. 6 SHATILI–ANATORI–MUTSO– KHONICHALA–KHIDOTANI– ATSUNTA PASS
The route can be traversed by foot, horseback and partially by car (Shatili-Mutso-Khonischala, 14 km). Creating a corridor between Tusheti and Khevsureti, it is one of the most popular trails in Pshav-Khevsureti.
Distance: 25 km. Above average difficulty Length: 2 days, 8-9 hrs (on foot), 5 hrs (partially by car) Max. height: 3,519 m Min. height: 1,800 m
The route follows a dirt road from Shatili northeastward. 2 km along the route, at the confluence of the Andaki and Arghuni rivers, Anatori burial grounds can be found. The motor road runs southward along the Andaki River Gorge, 12 km from which is the village of Mutso. From Mutso, along the Khonistskali River, the path goes through the village of Khonischala and ascends via a steep dirt road (1,900 m), passes forests and reaches a small plateau. There from, at an elevation of approximately 2,500 m, there is a turn to a second trail (6.1 – Khidotani Gorge-Andaki River). The main route continues south eastward towards Atsunta Pass (3 519 m). Several kilometers from the Kharostskali River, at a height of about 3,000 m, a steep serpentine road goes along slopes of slate rocks and eventually arrives at Atsunta Pass.

6.1 KHIDOTANI RIDGE– ANDAKI RIVER
This trail connects two long routes, making it possible to go directly down from Khidotani Range westward to Andaki Gorge. It is a good choice for those wanting to travel from Atsunda to the Pshavi region or middle Khevsureti.
Distance: 4 km. Above average difficulty Length: 2 hrs Max. height: 2,400 m Min. height: 1,800 m 7 SHATILI–MUTSO–ARDOTI– ANDAKI–ARCHILO– ANDAKI PASS–BORBALO
The route can be travered by foot, horseback and partially by car (Shatili-Mutso-Ardoti, 16 km). From Mutso to Andaki Pass, the trail will repeatedly cross the Andaki River and its small tributaries. Given that in springtime water levels in the river tend to rise, traversing this trail can be difficult.
Distance: 25 km. Difficult Length: 9 hrs (on foot), 6 hrs (by car and on foot) Max. height: 3,134 m Min. height: 1,400 m
From Shatili, the route follows a dirt road northeastward along the Arghuni River. After 2 km, at the confluence of the Andaki and Arghuni rivers, some Anatori burial can be found. The dirt motor road follows the Andaki River Gorge southward, where after 12 km it passes through the village of Mutso. From Mutso, the road goes along Adaki Gorge to the village of Ardoti. The route then passes the turns for Trails 1.1 and 6.1. From there, the trail goes southward, passing the village of Andaki and the site of an ancient Archilo settlement (1,800 m). It covers 6 km along rolling plains, and there are plenty of good places to set up camp. At aheight of about 2,100 m, at the confluence of two rivers, the trail goes southward, reaching a height of 2,700 m, crosses the Borola River, turns westward and goes southward to the environs of Andaki Pass at a height of 2,700 m. From there, after several km, the path joins Trail 3 (Datvisjvari Pass-Borbalo) and goes over to Patara Borbalo Pass.

7.1 ARDOTI VILLAGE SURROUNDINGS–KHAKHABO VILLAGE–MOUNT CHANCHAKHI SURROUNDINGS
This trail connects two long routes (Route 3 and 7) and makes it possible to travel between Khevsureti to Pshavi. The trail crosses the Chinchristskali River several times during the first 6 km of the route.
Distance: 12 km. Difficult Length: 6 hrs on foot Max. height: 3,134 m Min. height: 1,800 m
The route starts in the southern part of the village of Ardoti (at about 1 km along the trail) and heads westward along the Chinchristskali. After 6 km, the trail leads to the village of Khakhabo (at 2050 m a.s.l.), where some medieval fortifications are located. The path goes southwestward along the river gorge. After 6 km, it joins Trail 3 at 2,500 m a.s.l.

7.2 KHAKHABO–LEBAISKIRI The main road connecting trail (westward); it goes from the village of Khakhabo to Lebaiskiri. The trail starts in Khakhabo at 2,050 m a.s.l. and goes toward Datvisjvari Pass. At Lebaiskiri, it joins the main road. The trail passes through some beautiful and scenic flower-covered meadows.
Distance: 8 km. Difficult Length: 4-5 hrs Max. height: 2,500 m Min. height: 1,800 m