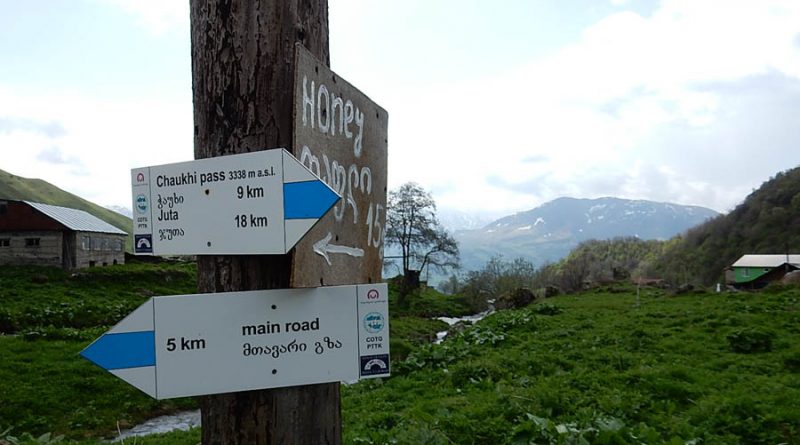 BANKS/ATMS
Purchases and other business transactions in Pshav-Khevsureti are made in Georgia’s national currency, the lari. The region lacks currency exchange points and ATMs. The use of credit cards is not possible. As such, please bring hard currency with you when travelling to the region.

TELEPHONE SERVICE
Most family hotels/guesthouses provide long-distance telephony through mobile network operators such as Magticom, Geocell and Mobytel; however the Pshav-Khevsureti area is not completely covered by these companies. It is best to purchase a SIM card prior to your trip to Pshav-Khevsureti in Tbilisi.

WATER
Tap water is safe in most places. Bottled carbonated and still mineral waters can be purchased in shops and/or guesthouses.

GROCERY STORES
When travelling in Khevsureti, please bring food and snacks with you. Fresh, ecologically safe products may be purchased at the local market in Dusheti, however. Small convenience stores can be found in Magharoskari, Barisakho, Korsha and Shatili.

PHARMACIES
Since no large pharmacies and properly operating medical centers are available in the region, please bring necessary medicines with you when travelling in the region. Village hospitals operate in populated administrative units.

In 2016, an association called Pkhovi Traditional Handicrafts was established to promote the products of local artisans, craftsmen and farmers. Since the flow of visitors – foreign and domestic, as well – increases steadily from year to year, the main emphasis is made on offering of attractively packaged, local products, in the guest houses, museums, shops and other public spaces. Tourists frequently use the opportunity to take them home as special souvenirs.

Let´s briefly present several of the artisans in Pshav-Khevsureti, the region historically called Pkhovi, whose name is reflected in the name of artisans’ association. Pkhovi has always been very rich in handicrafts, mainly knitted socks and embroidered hats, women’s and men’s dress, and last but not least, the wide array of cold weapons, used by Khevsur and Pshav warriors. There is big demand for the smaller, attractive items, which are cheaper and easier for visitors to take home.

In the village of Roshka, Tina and Shota Tsiklauris (who, by the way, are the owners of the Roshka Guesthouse) produce honey in original jars in the form of a rock. The packaging is not sheer chance, since their village is famous precisely due to it’s large, erratic boulders, connected by legends to the mythological fight of the hero deities with demons. Each year, Shota and Tina produce about 200 liters of rare honey from alpine meadow flowers of the highest Khvesuretian village.

Lela Natobishvili from Kalalo village near Magharoskari started in 2017 the preparation of the most renowned Pshavian foodstuff the so called dambal-khacho. It´s a sort of hard, moldy curd white cheese. In Lela´s enterprise, about 700 kg of dambal-khacho is produced, including a basic version as well as versions with the addition of mint, garlic, tarragon and wild thyme. Small loafs of cheese are attractively wrapped in cellophane or placed in small clay jars and baskets, or most originally, in miniature, knitted bags (so called khurjins), decorated with famous mountain ornaments. Lela´s production has won great popularity on the annual cheese festivals in Mtskheta and Tbilisi.

Almost every visitor of Khevsureti uses the opportunity to visit the house of painter and ethnologist Shota Arabuli and his family in Korsha in the vicinity of Barisakho. The Arabuli Art House serves as a guesthouse and also as an exhibition hall for pictures and artefacts created by Shota and his son Berdia. For a keepsake you can buy there the wooden statuettes of Khevsur boys and girls dressed in traditional costume adorned with typical cross-shape embroidery. Or you can pick out one of the highly esteemed, sharp iron combat rings, which were an indivisible part of every-day equipment of all Khevsur men.